I am a born and raised Texan.  I grew up in West Texas with a bunch of folks who were in many ways very similar to one another.  When I was a young student at Monterey High School in Lubbock, Texas, I was already broadcasting on a local radio station.  If you had told me that technology would allow people to podcast around the world with listeners in most of the countries on earth, I simply would not have believed you.  We certainly live in a remarkable time.

If you are reading this blog and/or you listen to our Free Range Texan podcast, let me give you some inside information that will not actually be mentioned on our podcast until Episode 9 (yes Virginia … we actually plan that far ahead.)  Whoever you are, wherever you’re from, we would like to welcome you to the family here on our blog.

Here’s how it works … if you will use our e-mail address (info@freerangetexan.net) and send in a picture of yourself (maybe even your family), tell us your name and where you’re from, then don’t be surprised when you are chosen to appear here in Texas, the USA, and around the world on our Free Range Texan blog.  For your efforts for now, we will just be welcoming you to our Free Range Texan family.  We are so new that some of the things planned in our future have not arrived yet … like T-shirts, coffee mugs, caps, etc.  I bring that up only because we are currently thinking of special ways to welcome so many of you to our family.  So, go ahead …. send ’em in.  We look forward to meeting you.  See y’all in the next Episode!

Free Range Texan podcast Episode 7, among other things, deals with eyewitness accounts of the creatures known as “Mothman”.  If you’re like me, you have heard this tale, but usually it’s up in the northeastern United States.  In the last 30 days, our investigators have uncovered no less than three separate Texas-based experiences with the same type of creature described as “Mothman”.  Honestly, how many things are there out there in our world that we as yet do not acknowledge their existence?  In upcoming episodes we will visit with individuals who believe that there are Pterodectyl creatures existing still today on earth.  And for a long time everyone thought that the Chupacabra beast was probably a myth.  But, now we know that it is real, and in upcoming episodes we’ll show you evidence.  Texas and the world beyond is an amazing place.  And, we here at Free Range Texan are just getting started.  Episode 7 is not to be missed.

Whoever you are, wherever you are reading this blog, we here at Free Range Texan want to sincerely extend our hand in traditional Texan friendship.  Communicating with us is easy, either on our blog or through info@FreeRangeTexan.net.  We are thankful for the responses and suggestions we have had, and we welcome your genuine thoughts and opinions on upcoming podcasts.  And, finally, don’t forget we are open for submissions to our Free Range Talent File.  We’re always looking for talented people in or out of Texas.  We wish you all the very best.

Thank you friends.  Our first official twenty days ROCK!  While there was some beta testing for a couple of weeks prior, October 28, 2018 was our official kick-off.  By that measure, we are just now 20 days old.  I turned to Kathy and said, “Man, it seems longer than that.”  She laughed and we both agreed that the dream is worth the effort.  None of it would work without our podcast listeners and blog followers.  We’re grateful and promise to keep it interesting.  Episode 7 gets a little scary (Moth Man).

The Magnetization of Lake Martin

I remember a few days after I moved out there, some of my co-workers and I were having lunch at “the grocery store”.  It was really a grocery store, but they had a restaurant and an outdoor, covered dining area.  One of the fellas in our group spilled a cup of ice on the table and I sprang into action!  I scooped up what I could and rushed over to a nearby flower bed and put the ice in it so as to give the plant a drink and not let that precious water go to waste.   That was the *first* time I noticed them looking at me as if I had lost my mind.  There were many more times over the next year and several months.

The town I worked in is called Alexander City and Lake Martin is nearby.  Lake Martin is fed by the Tallapoosa River and is one of the largest man, er person oh whatever made lakes in the US.  It is 31 miles long and even though the average depth is 41 feet, there is a place where the water is over 150 feet deep and 743 miles of shoreline.  One of my friends has a boat and he graciously allowed me aboard a few times.  This is the story of one of those occasions.

Have you ever heard of “magnet fishing”?  Dare you to do a search on YouTube for “magnet fishing”.  You will find a LOT of videos and I wanted to try my luck, so I bought a large magnet with a long name that boasted that if you get your finger caught between two of them, there will be blood!  Who could resist?  My magnet arrived and I promptly stuck it to a metal desk.  Wish I hadn’t done that.  I tugged and tugged and actually lifted that side of the desk off the floor!  A wiser friend of mine came in and slid it right off the desk.  Did I just admit to that?  Guess so.

I tied a good length of “marine grade” rope (which we called nylon rope in West Texas) to that magnet with my best boy scout knot (accomplished by finding a boy scout to tie it).  I took it out to the nearest fishing dock at Lake Martin and in the space of about 6.5 minutes, caught roughly 2500 nails.  This thing is awesome for a carpenter!  The water there was about 15 feet deep and I was bobbing that thing up and down and I actually heard the “click!”.  Wow, I had caught something that sounded different from the nails!  I brought it up and saw something shiny on the end of that magnet.  Could it be….treasure?  It was a leatherman 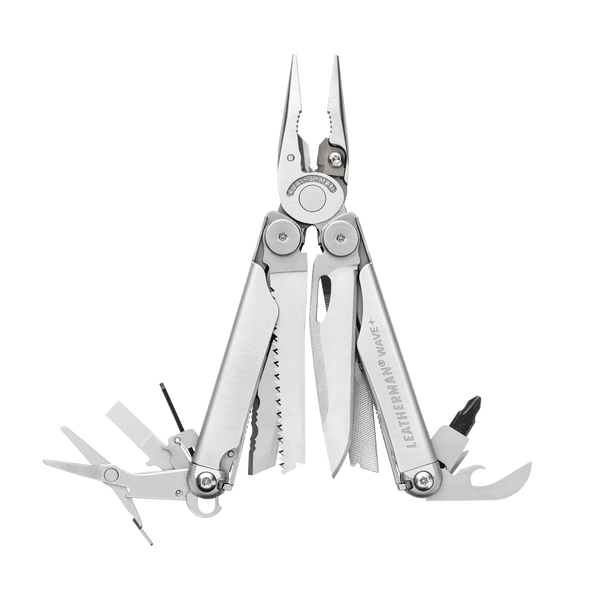 that some poor fisherman had lost over the side of the dock.  Wow, 4 more of these would come close to paying for that magnet!  I was hooked! (clever play of words for a fishing story, huh?)

My friend with the boat suggested he knew a place where an old bridge had crossed part of the lake and he would take me there to magnet fish.  Woo-hoo!  The problem with magnet fishing on a boat is that the current takes you where you don’t want to go or you drop anchor and risk getting your magnet rope tangled.  I wish we had dropped anchor.

We were drifting toward shore and I started to haul my magnet up but my friend said he didn’t think that would be necessary as he was just going to crank up to move a little way out and my rope wouldn’t be anywhere close to the prop.  My rope was quickly VERY close to the prop.  My prop and that rope had a relationship.  My rope hugged the prop and then they parted company.  My 8 foot end of the rope ended in a bunch of tattered nylon.  The prop had about 23 feet of the middle of the rope that it didn’t want to let go.  The last 19 feet of rope went down to the bottom of Lake Martin dragged by a magnet with a long name that would bloody your finger.  My friend snickered some condolences as he dived in to free the prop.

I sometimes wonder where the magnet landed.  I think it would be fitting if someone, long ago had dumped an old metal desk off that bridge and my magnet stuck to it, never to be parted.

Oh, I bought a new magnet.  A better magnet.  A magnet that claimed even greater loss of limb if it got angry with you.  I have a new, longer “marine grade” rope waiting for a boy scout to tie it on.   Of course, I’m now back in West Texas so the magnet has stayed pretty dry and safe and not nearly as much fun.

We all need to discuss something ever so briefly.  I know what you’re thinkin …. A-Team PR is not filthy stinkin rich …. yet!  Our production budget on the podcast episodes, web platform, travel, interviews, artwork, and copywriting can make for some late night production meetings in the conference room.  So there …. I said it.

And you thought we were just selling all the cool stuff in the Free Range Texan House of Treasures for fun.  Well …. it is fun!  But, advertising on our podcast is an important piece of the puzzle.  You might say Michael Shawn’s Campfire takes a certain amount of fuel (wood).  Bearing all this in mind, we are placing an active banner on this blog.  DON’T GO THERE …. unless you are interested in putting our podcast to work promoting your cause/business.

Yes, brothers and sisters, we are selling promotional announcements on our podcast.  We have found that our production studio works best when the electricity is turned on, etc.  It is a fact that the Free Range Texan is now being listened to throughout the United States, and by English speaking people in Canada, The U.K., over the wall into Mexico and South America, the EU, France, Italy, Spain, Japan, India, and Vietnam …. and did I mention Texas?  So you see, what kind of red blooded American (Texan) podcaster would not, should not hang a billboard or two on that?

Maybe you can help.  If you have knowledge of anyone who would like to advertise on the Free Range Texan podcast, bring them here and tell THEM to click on this banner.  We will graciously do the rest.  Thank you my friends.

I think it’s time that we stop the presses for just a moment and recognize the value of having an outfit like A-Team PR on your team when and if you decide to produce your own podcast.  The latest example of their efforts is our newly designed podcast player that presents not only our latest show, but also easily displays our entire “Free Range Texan” library.

We have discovered that many of our listeners are not quick to latch on to iTunes, Google Play, Tune In, etc., but instead are more comfortable just going to FreeRangeTexan.net and receiving full access to our podcasts.  So, “knock yourself out!”

We have waited, all the while knowing that Stan Troy’s De Lux Cafe would be a gift that up until now was a hard thing to find.  Stan is featured in our”Free Range Talent File” in Episode 6 of our podcast.

We are glad to tell you that his music is now available for download.  Click the album cover above and enjoy!

Wild hogs continue to do untold amounts of damage throughout the Lone Star state.  It’s true that Texans continually brag that everything’s bigger in Texas.

However, none of us are proud to see these huge predators that have been introduced into our ranch land.  Thanks Glen for the picture.